Be Inspired by Motivational Yearbook Quotes 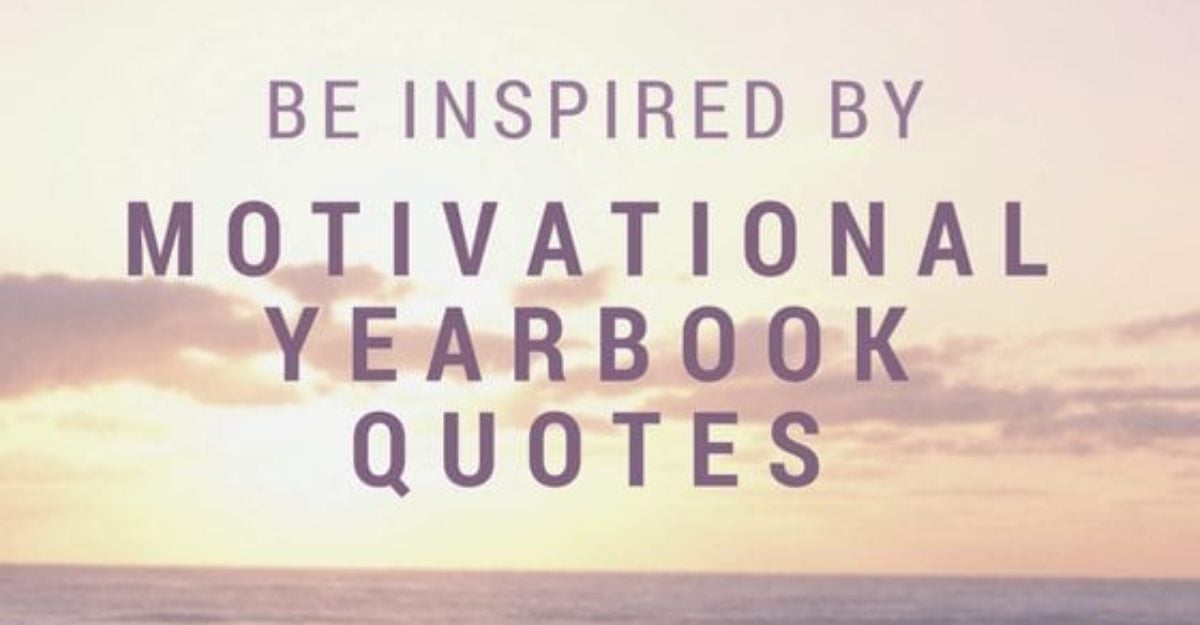 This is an updated version of an article originally posted 03/12/2010
We will continue to update this article with the very best motivational yearbook quotes.

Sometimes, nothing says it better than a quote.

You can add quotes to your yearbook by including them under your headshots, as part of a cover sheet to divide sections, or to express your feelings in your personal message.

If you’re feeling creative, you can even include them as part of your yearbook theme by embedding them at the top or bottom of the page.

Here’s some of our favourite motivational yearbook quotes from famous and prominent people. Have a look through these words of wisdom; if anything takes your fancy, feel free to use it in your yearbook!

“You can’t knock on opportunity’s door and not be ready.”
– Bruno Mars

“I wanted to be successful, not famous.”
– George Harrison

“What’s money? A man is a success if he gets up in the morning and goes to bed at night and in between does what he wants to do.”
– Bob Dylan “A lot of people never use their initiative because no-one told them to.”
– Banksy

“Every child is an artist. The problem is how to remain an artist once he grows up.”
– Pablo Picasso

“I would rather die of passion than of boredom.”
– Vincent van Gogh

“They always say time changes things, but you actually have to change them yourself.”
– Andy Warhol

“Those who do not want to imitate anything, produce nothing.”
– Salvador Dali

Yearbook Quotes from Authors and Poets

“Try to be a rainbow in someone’s cloud.”
– Maya Angelou

“You are never too old to set another goal or to dream a new dream.”
– C.S. Lewis

“Keep your face always toward the sunshine – and the shadows will fall behind you.”
– Walt Whitman

“Two roads diverged in a wood, and I – I took the one less travelled by, and that has made all the difference.”
– Robert Frost

“How wonderful it is that nobody need wait a single moment before starting to improve the world.”
– Anne Frank

“We’ve all got both light and dark inside us. What matters is the part we choose to act on. That’s who we really are.”
– J. K. Rowling

“If they can make penicillin out of mouldy bread, they can sure make something out of you.”
– Muhammad Ali

“If you do not believe you can do it then you have no chance at all.”
– Arsene Wenger

“The more difficult the victory, the greater the happiness in winning.”
– Pelé

“You can’t put a limit on anything. The more you dream, the further you get.”
– Michael Phelps

“The successful warrior is the average man, with laser-like focus.”
– Bruce Lee

“I hate that word: ‘lucky.’ It cheapens a lot of hard work.”
– Peter Dinklage

“You’re only human. You live once and life is wonderful, so eat the damned red velvet cupcake.”
– Emma Stone

“The minute that you’re not learning I believe you’re dead.”
– Jack Nicholson

“Goals on the road to achievement cannot be achieved without discipline and consistency.”
– Denzel Washington

“You become what you believe.”
– Oprah Winfrey

“If you are working on something exciting that you really care about, you don’t have to be pushed. The vision pulls you.”
– Steve Jobs

“Be nice to geeks – you’ll probably end up working for one.”
– Bill Gates “A person who never made a mistake never tried anything new.”
– Albert Einstein

“We must believe that we are gifted for something, and that this thing, at whatever cost, must be attained.”
– Marie Curie

“If I have seen further than others, it is by standing upon the shoulders of giants.”
– Isaac Newton

“A man who dares to waste one hour of time has not discovered the value of life.”
– Charles Darwin

“However difficult life may seem, there is always something you can do and succeed at.”
– Stephen Hawking

“Let your life lightly dance on the edges of time like dew on the tip of a leaf.”
– Rabindranath Tagore

“The mind is everything. What you think you become.”
– Buddha

“An unexamined life is not worth living.”
– Socrates

“There is only one way to avoid criticism: do nothing, say nothing, and be nothing.”
– Aristotle

“Care about what other people think, and you will always be their prisoner.”
– Lao Tzu

Yearbook Quotes from Visionaries and Activists

“I have learned over the years that when one’s mind is made up, this diminishes fear.”
– Rosa Parks

“Our lives begin to end the day we become silent about things that matter.”
– Martin Luther King Jr.

“How wonderful it is that nobody need wait a single moment before starting to improve the world.”
– Anne Frank

“What counts in life is not the mere fact that we lived. It is the difference we have made to the lives of others that will determine the significance of the life we lead.”
– Nelson Mandela

“Each day provides its own gifts.”
– Marcus Aurelius

“Be the change that you want to see in the world.”
– Mahatma Gandhi

“Success is walking from failure to failure with no loss of enthusiasm.”
– Winston Churchill

“I attribute my success to this: I never gave or took any excuse.”
– Florence Nightingale

“Happiness is not something ready-made. It comes from your own actions.”
– Dalai Lama “The best time to plant a tree was 20 years ago. The second best time is now.”
– Chinese Proverb

“Certain things catch your eye, but pursue only those that capture the heart.”
– Indian Proverb

“If the wind will not serve, take to the oars.”
– Latin Proverb

Did We Miss Anything?

If we missed your favourite motivational quote off our list, we want to know! Write it in the comment section below to share it with the yearbook community! And don’t forget there’s load more Yearbook Quote Ideas in our other blog posts!